Man With a Camera

Man With a Camera 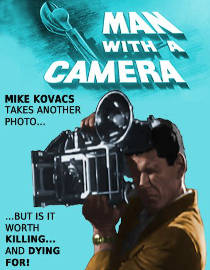 Charles Bronson stars as Mike Kovac, a freelance photographer living in New York City and specializing in special assignments. A former World War 2 combat photographer, Kovac uses a wide range of innovative methods to help diverse clients, such as newspapers, insurance companies and private individuals, get the photos they need. His tactics include hiding cameras in radios, cigarette lighters and items of clothing. Mike occassionally calls on his immigrant father Anton Kovac (Ludwig Stoessel) for advice, as well as the NYPD where his liaison is Lieutenant Donovan (James Flavin).

Man With a Camera originally aired from 1958 - 1960 and a total of 29 episodes were created during its two season run. The series featured many notable guest stars who later went on to fame and fortune on TV and the silver screen.